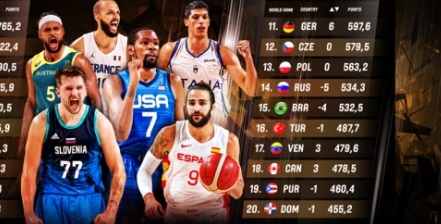 According to the FIBA’s World Ranking released on the 13th, Slovenia jumped to fourth place. Slovenia, led by Don , who plays for the Dallas Mavericks (NBA), failed to win a medal at the Tokyo Olympics, which ended on the 8th, but finished fourth and showed impressive performance.

The U.S., which has won four consecutive Olympic titles, firmly maintained its top spot, and there was no change in the ranking of Spain and Australia, which ranked second and third. France, which won a silver medal at the Tokyo Olympics, rose from seventh to fifth. Italy, which made it to the quarterfinals of the Olympics, was ranked 8th in two places, and Germany, which passed the group stage, was also ranked 11th, up six spots.

South Korea, which failed to qualify for the Tokyo Olympics, went up one notch from 30th to 29th.

Among Asian countries, Iran ranked 22nd, followed by China at 28th, South Korea at 29th, Philippines at 31st and Japan at 35th.