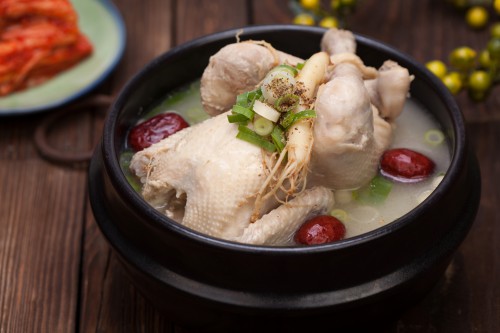 Samgyetang is a dish that has been boiled for a long time by pouring glutinous rice, garlic, jujube, and ginseng into the stomach of a young chicken. It is considered a summer food. Linkage ( :: Spirit. The chicken, which is a little bigger than a chick, is called ‘Yeonggyebaeksuk’, which was called ‘Gyesamtang’ with ginseng, but is now solidified into Samgyetang.

Cho Poong-yeon said, “Gye Sam-tang is to put ginseng in a hen and eat it with a keen appetite. Cut the stomach and put in the ssam and tie it with thread so that it won’t come out. This is a more relaxing tasting of the family than the opening soup in summer. “I think that the name of the ginseng soup was re-named after the ginseng became popular and foreigners recognized the value of ginseng,” he said. But now, samgyetang has become a common food, and Boshintang has become a burden for ordinary people.

It is one of the most popular Korean foods for foreigners visiting Korea, and a samgyetang restaurant in Seosomun, the origin of samgyetang, is full of Japanese and Chinese tourists no matter what.

Since samgyetang takes a long time to make, it is packaged in canned or retort form, and products containing glutinous rice, jujube, and ginseng are also available along with chicken. A Korean food company has entered Southeast Asia and runs a Samgyetang specialty store and exports a lot.

When you boil samgyetang, get a small chicken suitable for one person to eat alone, and take out the intestines as little as possible when cutting the stomach, put the soaked glutinous rice, ginseng, jujube, and garlic, and tie them with thread so that they don’t slip out and boil them slowly. The secret to the taste of samgyetang is that the ingredients are important, but it is boiled hot in the earthen pot.

Cooking method
It was called ‘Yeonggye Baeksuk’, which was boiled in white soup, but was called ‘Gye samtang’ with ginseng, and now it is called ‘Samgyetang’.

Ingredients (4 servings)
4 chickens (about 600g) in Yeonggye, 2 cups of glutinous rice, 8 slices of garlic, 8 pieces of jujube, 4 roots of ginseng (cattle), 3 liters of water (15 cups), salt, pepper, and scallions.
(A) 1 tablespoon of salt, 1 tablespoon of ginger juice, a little bit of ground pepper.

How to make it.
1. The spirit system cuts off the tail a little bit, scrapes the gut and blood vessels clean, then rinses them and drains them.
2. Wash the glutinous rice and soak it for about two hours, take it out on the tray, put the jujube on the chicken’s stomach,안전놀이터  put two pieces of glutinous rice, garlic, two jujube and ginseng, respectively, and tie the cracked spot with a string or threaded with a toothpick.
3. Put the chicken in a pot that can hold about four chickens and boil it by pouring water.
When it boils up, reduce the heat and simmer for more than an hour.
4. When the chicken is cooked smoothly, take it out, pull out the string or toothpick, and season the soup with the seasoning of (a).
5. Put one in a large bowl or a small pot, boil and pour the soup, and put salt, ground pepper, and chopped scallions separately.